Through the lens of a loved one – the hidden battle

The gratitude comes in waves. At times it’s like having an out of body experience and watching from above. I watch my husband as he sits on the floor building LEGO with our son, as he is out in the surf teaching our daughter to ride the waves, play fighting with our Golden Retriever or simply lying beside me peacefully sleeping at night.

The sliding doors moment is much more painful. Somewhere along the line, my husband Jason’s relationship with alcohol turned from being an avid wine lover to someone who relied on alcohol to get through his day. In a very short period of time his passion for wine went from proudly choosing the perfect wine to share with friends at a dinner party to struggling with being able to get out of bed due to the depression and the mental battle that his addiction brought with it.

My husband’s mental health was declining so rapidly before my eyes yet for a long time I was unable to see it. A perfect example of the ‘typical’ Australian male, he powered through, hesitant to allow any form of perceived weakness to be shown. Slowly at first, then at full speed, alcohol stole all of the joy from his life, and it almost stole him from our lives.

If anyone knew Jason, they would never believe the battle that was going on between his ears. From the outside he looked fit and well. He appeared to have it all. The perfect job, two incredible children and close family relationships. From the outside nobody would have known.

Of the many things that attracted me to Jason was his passion for life; he was a go-getter and was excited for each day. His moral compass was strong, he had a wonderful family upbringing, he was a hard worker, a loyal friend and I later found out, after the birth of our two children, as far as Fathers go, he was the best.

The steep period of decline was probably only around 18 months to 2 years. As his dependency on alcohol increased he pulled away from me. I watched on helplessly as my beautiful husband began to sink into a deep, dark hole.  Occasionally he would reach his hand out asking for help, but his old ‘friend’ alcohol would always draw him back to that familiar place.

It’s hard to take myself back to that terrifying and lonely place, a place where hope was beginning to fade. To the chaos and fear of what might come next. The constant adrenalin running through my veins, worrying about his safety, his mental state. He was never violent or aggressive when he was drinking; my fear was more around his failure to resist picking up a drink and how that would destroy his confidence in his ability to stay sober. When it happened it would send him down the cycle of shame and hopelessness and he would withdraw further from me. I worried for my future, what it would look like and I worried for our precious children. 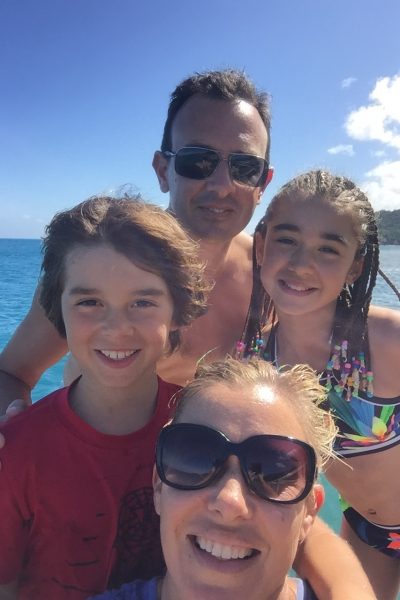 The hidden battle – this photo was taken in early July 2018 while on a family holiday in Fiji. From the outside it looks like the picture perfect holiday snap, the kids and I were oblivious to the torture going on in Jason’s mind.

During that time I found strength by talking to others. I began to share my concerns with family and friends. Conversations would open and I found people who had battled addiction themselves so they were able to help prepare me for how Jason may have been feeling and advised me on the best way to handle situations (in their opinion). I read, researched and educated myself on alcohol addiction, listened to inspirational podcasts, I focussed on choosing compassion over anger (although at times this wasn’t always easy) and tried to maintain a cautious form of optimism. I found a psychologist who had an understanding of the complexities around addiction and worked on controlling my anxiety with meditation and mindfulness.

One of the most difficult lessons I had to learn was that no matter how much I wished Jason would stop drinking, unless he wanted to stop, there was absolutely nothing I could do. No amount of begging, pleading or bribery can help someone get sober unless they are ready themselves. Similar to fitting the oxygen mask on yourself first in the case of an emergency during a flight, I had to learn to focus on my own mental health for myself and for our precious children.

Everyone has a different story. For Jason there was a lot of skidding along rock bottom, attempts at sobriety, failure, defeat, picking himself up and trying again, short stints of sobriety, failure again. The failures at the time were shattering for Jason and for those who love him, but I now know that these are an important part in his journey and his realisation that moderation is not possible.

On July 19th, 2018 we nearly lost Jason to his addiction. He was sick of the constant fight between his ears; he was sick of the noise in his head and the shame that the illness brought with it. Alcohol nearly stole my husband away from us. But it didn’t win. Jason has recently celebrated 2 years of sobriety.

Today the gratitude I feel is palpable. Our life now is unrecognisable to that period. Today I have a husband and father who is fully present, who selflessly speaks up about his challenges with alcohol in the hope that it may be able to help others before they swim too far down stream. Jason has once again become the man I fell in love with 18 years ago, and dare I say it … an improved version.

Life is not perfect; I know that now.  While I wish our family didn’t have to go through the heartache of those painful years,  I know the lessons from the journey our family has taken have given greater meaning to our lives and have built a resilience I didn’t know I could find, and for that I am forever grateful.

Andy is the co-founder of ETCH Sparkling with her husband Jason Quin. ETCH stands for Every Time Choose Health. You can read Jason’s story published previously here. ETCH is also on Instagram and Facebook @etchsparkling