The five best ways to talk to mum about her drinking

“Such is the strength of denial when it comes to drinking … that a child talking to their parent may not even hit home.” — Talitha Cummins

Generally, mums are known to talk a lot. They call for a chat about anything: to tell you a trivial incident that happened at the shops; to remind you to pay your health insurance bill; or pester you to take back a stored box of clothes in your old room. But because mums are so used to helping others and putting themselves last, it can be hard to turn it around and open up a conversation with mum about how she may be drinking.

At Hello Sunday Morning, we refer to the mums in the Daybreak communityas ‘supermums’; they’re superheroes in our eyes. But the thing is, that’s a pretty high standard to live up to, and it can come with a lot of pressure. So far, Hello Sunday Morning has supported 80,000 women on their journey to change their relationship with alcohol. Our statistics show 56 per cent of female members on Daybreak have children, and of those mothers, 7.4 per cent have over six drinks daily or almost daily.

We spoke with mother, Australian journalist and Hello Sunday Morning ambassador, Talitha Cummins, about why there is a stigma attached to mums who drink and why it’s so hard for mothers to accept that they may need help to change their relationship with alcohol:

“We’re very good at drinking but we’re not very good at acknowledging the problems that come with it. There’s a tendency for people to sweep this issue under the mat because it’s a little bit too confronting. Research shows that women in their late 30s and early 40s have caught up to men on the drinking front for a number of reasons, like women entering the workforce and equality. I also think there’s an extra layer of stress on women who do a lot of the work looking after the children as well as working full time and that adds another layer of pressure. Alcohol is used to relieve that pressure. Too much of relying on that to relieve the pressure creates a problem.”

Talitha described herself as the definition of a high-functioning drinker, a category that we find often gets overlooked by GPs and social groups because they break the traditional stereotypes of alcohol dependency: a bedraggled man carrying a paper bag with hard liquor around the street.

“I would get up in the morning and go for a run no matter how much I’d had the night before. If I could get up and go for that run and turn up to my hair and makeup and present well, than I thought the alcohol wasn’t having an effect on me. I’d still be able to work all day and it wasn’t until I got home that night that I’d start drinking again. So on the face of it, I was still doing my job, perhaps not to the best of my ability, but it wasn’t a problem until it was. Things became unmanageable for me.”

Talitha thought she was the only one who knew that her drinking was getting out of hand. It took an intervention from her Chief Of Staff at work who sat her down and asked her if she was okay, for her to allow herself to accept the situation.

“I think I was just at the right point and I said ‘no’ and I just crumbled. I was ready for someone to reach out and say anything to me because I was just so sick and tired of going through this whole thing of drinking, feeling shame and guilt and drinking to make myself feel better.”

Talitha says it is so difficult to talk to a parent about their drinking because in a lot of instances, they won’t accept they have an issue themselves.

“I spoke to a parent this week whose daughter won’t speak to them because of their drinking. But this person is still in complete denial about the problem and wants to stop drinking, but not even being told by their child that there’s an issue makes them see that they need help.”

So, how do you begin the conversation with your mum about her relationship with alcohol?

There are many ways you could approach the topic, and the best for you may vary depending on your relationship with your mum. Talitha recommends a loving approach.

“I know there can be a lot of fall out from things that may have happened with the parents drinking, but approaching lovingly from a good place and making sure they understand that you’re there to support them is a good start to then let them know that you also think they need to seek help.”

You could also try opening up yourself and sharing something about your experience, such as:

“I have been thinking a lot about my relationship to alcohol lately. I have realised that it has been really valuable for me to reflect on it.”

Saying something personal demonstrates to the other person that you are comfortable (or maybe uncomfortable, but open to) being vulnerable around them.

In her TED talk, Dr. Brene Brown discusses the power of vulnerability. It is exceptionally difficult to let yourself be vulnerable in front of others.

“Staying vulnerable is a risk we have to take if we want to experience connection.” Which, many have argued, is sort of the point of everything. We are wired to connect to other people, it’s one of the things that has enabled humans to be so successful as a species and it is a powerful tool for the healing process.

But what if mum doesn’t see an issue and gets defensive?

It may be a good idea to be prepared for this reaction, as drinking carries with it a lot of negative stigma from our society and is linked with feelings such as shame and guilt. Which is ironic, as the social pressure and expectation to drink alcohol is massive.

Talitha points out that confrontation is often avoided because of the expectations that you should be able to handle your drinking.

“None of my friends actually confronted me about it, despite them seeing some of the things that I was doing. It’s awkward not only for the person who is drinking, but for the friends as well; they don’t know what to say, so there’s this embarrassment around it on both sides.”

People can become enraged at a suggestion that they may be drinking too much and deny that they need help. You may find a breakthrough and the person will acknowledge their drinking, but they may deny addressing it, saying something like: “I can stop anytime I want to” or, “Everyone drinks to unwind sometimes.” 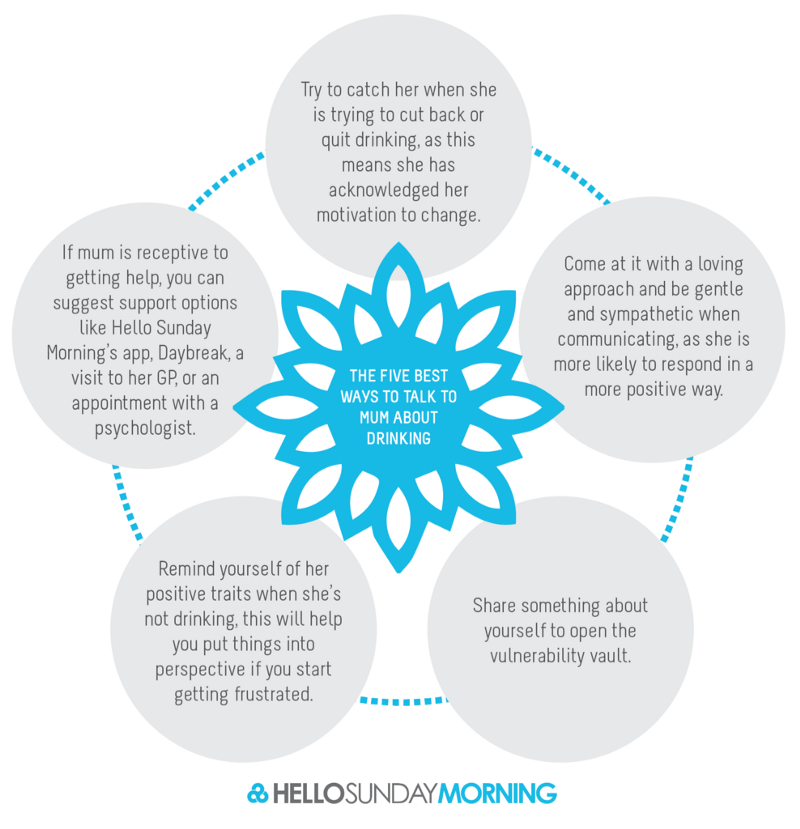 A Washington Post article written by Sara Amato, shares her story of struggle when confronting her mum about her relationship with alcohol and the positive opportunity she got out of the experience.

“Over the years, I tried to talk with her about her alcoholism, but she never wanted to hear it. It forced me to come to terms with the fact I couldn’t change her and that it didn’t need to weigh me down. She refused to recognise she had a problem and actively denied it whenever I brought it up. I could pour her wine out, but she’d still find ways to drink. If she wasn’t willing to change then it couldn’t be my problem anymore.

Her drinking forced me to be more cautious. It wasn’t until after college that I started drinking socially. I thought that if I drank anything, I would turn into her. But the more she denied she had a problem, the more it dawned on me that I wasn’t her. I had developed more self-awareness and control than she had ever shown me. But that realisation didn’t happen overnight. There was never any therapy sessions or group programs, there was only time. Most importantly, I realised that talking about these issues and getting help isn’t shameful, because [drinking] isn’t a one-person [issue]: It affects everyone. I know that now at 27, but when I was 16? No, I was really stubborn. It took me a long time to realise that letting people in doesn’t make you weak. And you should never feel alone when dealing with a loved one’s addiction. Because you’re not.”

Firstly, you need to acknowledge the issue. You may be in denial to protect your parent or hide the issue. Admitting that your parent needs support, even if they won’t, is the first step in taking control.

Don’t blame yourself and be aware of your emotions. Accepting and acknowledging helps you put things in perspective. Remind yourself that you are not responsible for your parents drinking too much and that you cannot cause it or stop it, only they can. Recognising how a parent’s drinking makes you feel can help you from burying your feelings and pretending that everything’s fine.

Learn healthy coping strategies. When we grow up around people who turn to alcohol or other unhealthy ways of dealing with problems, they become our example. It may be a good idea to find some role models who can help you learn healthy coping mechanisms and ways of making good decisions.

Find support. Talk to people that may have gone through a similar thing and find support through Hello Sunday Morning or other support programs.

“To people out there who are in the midst of a drinking issue, life can get better. I was in such a low place too and I never thought that I would find the allusive happiness. But with a lot of hard work, you can get there. There is hope.” — Talitha Cummins

Hello Sunday Morning is a movement towards a better drinking culture. Our vision is a world where drinking is an individual choice, not a cultural expectation.
How do you feel about your relationship with alcohol?Download Daybreak, for iOS or Android to change your drinking habits today. Alternatively, join our online community of over 100,000 like-minded individuals.