Anyone who has seen the film Into The Wild will be able to recall one particular scene towards the end the movie, very well. It goes as such; the camera opens with the main character (Christopher McCandless) lying on the floor of his soiled trailer. After 2 years of living a life of solitude ‘in the wild’ he lays painfully squirming around on the floor of his trailer, dying from starvation and having mistakenly eaten a poisonous berry. He grabs a pen and paper and then proceeds to shakily write on a piece of paper;

’the only true happiness is shared’

I’m not sure whether or not I agree with that statement, but I know for sure that nearly all people feel that way sometimes. At least during the awake hours anyway.

Maybe there are some enlightened Buddhist monks happy to be chillin’ up in the Himalayas by themselves, but for the majority of us, solitude is an unpleasant place to be.

So what does this have to do with drinking?

Over the past few weeks, have received a lot of interest from the blog that talked about how group dynamics operate in drinking environments (special shout out to Michael, Adam & Chris). Particularly about one of the things we saw at the Normanby last Sunday.

We noticed that people in a group of three or five would often split into sub-groups of 2 people for conversation and the odd one out would stand there next them, looking around awkwardly and drinking significantly more. It was observed that this ‘odd person out’ would end up drinking drink at least twice as much as the other two, twice as fast.

Why? The simple answer is.. ta-da ta-da… humans have this niggling little necessity inside us that makes us feel like we need to belong.

So where does this feeling come from?

If you study a group of spider monkeys (… and every one should at least once in their life), when you remove one of them from the pack the solo monkey will die extraordinarily quickly. Not because it can’t physically survive but because it psychologically can’t. It’s the same with children and many adults. We either die, or go crazy (alla Tom Hanks in Cast Away).

It seems that we are born with this internal software that says ‘IF LEFT ALONE: go ahead and self-destruct’.

So, back to our group of three at the Normanby… here we have a diagram of the two people, deep in convo, feeling like they belong. They know each other and are comfortable to be in that space, with far less drinking needed. The people at the Normanby are pretty skinny…

However, as can be seen in diagram 2, our third man is not in the circle of belonging of the other two. He is trying to belong to a much wider circle of people. This explains why he drinks a lot more and looks around awkwardly to belong to a larger population. The sad truth is that in order to build rapport with a crowd he barely knows, he feels that he needs to drink a significant amount more. 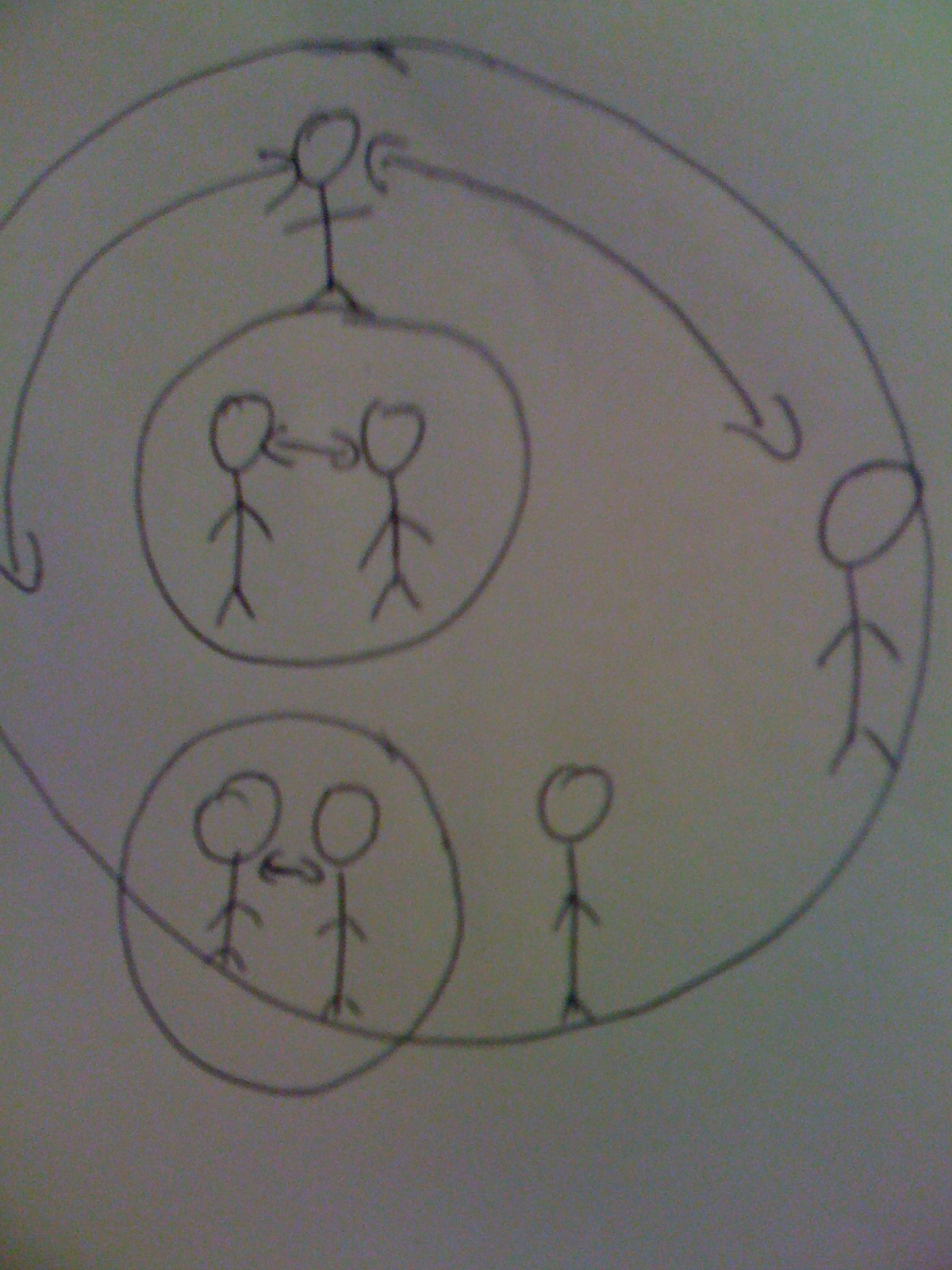 It’s not just drinking though. Examples of how we need to belong, at any cost, are all around us. Look at how a group of smokers gravitate to each other outside a building, belonging to their little minority club. Look at how Jewish people can’t even push an elevator button on Saturday, all belonging to their religion. My favourite example – Scientology. Even look how people will kill another human being in war, all for the sake of belonging to a country!

The truth is, belonging just as inevitable and inescapable as our Ego. You need to belong to groups, or you go crazy. Simple. However, one of the little messed up things about our society is that in order to belong to 90% of groups in Australia, drinking is a pre-requisite.

So I pose this question to you…

If drinking is the major pre-requisite in nearly all activities that involve your friends, your family and of course your work colleagues, what choice do you really have around drinking that has anything less than the gravity of choosing to belong or not belong?