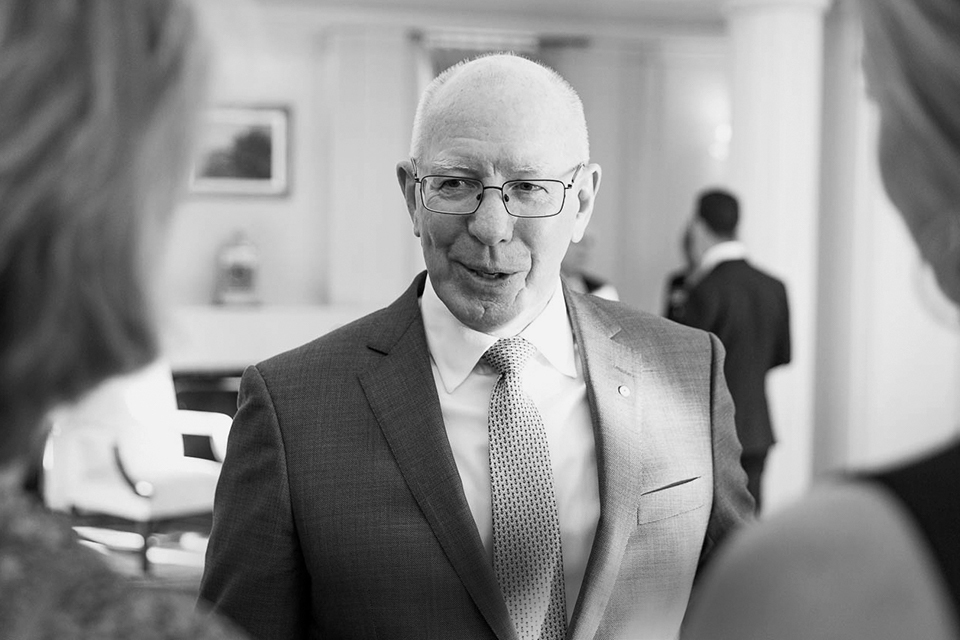 A discussion with our new Patron-in-Chief, the Governor-General of Australia

His Excellency General the Honourable David Hurley AC DSC (Ret’d) has been an incredible advocate for our work at Hello Sunday Morning and has been there for us over the years to help us have the biggest possible impact. He says that once you’ve seen alcoholism at work and how it can disorientate lives, change personalities and upset ambitions, you can understand why our work is important.

We are honoured that he has accepted the role as our Patron-in-Chief, and we have edited comments made in an interview with our CEO and founder, Chris Raine, to mark that appointment.

Why are you putting your support behind Hello Sunday Morning in this way?

No families are spared by the impact of alcohol, and in my intimate family and broader family, I’ve seen how it has damaged lives and held people back, and how difficult it is to get on top of it and to maintain an alcohol-free life for people who are alcoholics, and also how to control it.

I’m not a teetotaller, I drink a glass of wine and all those sorts of things. But for people who are worried about where they sit in their use of alcohol, we need to educate them, talk to them, support them and help them. And for those who are concerned about partners and friends, you need somewhere you can guide them to.

The country has been through the teetotal, sign-the-pledge era, and that didn’t work. We need education to know how to enjoy alcohol if you are going to drink, and how to know the warning signs if you’re drinking more than you should.

When I was Chief of the Defence Force I looked at the range of offences occurring in the forces, and 90% of them would have alcohol as a key factor. So we had to reduce the temptation to binge drink, because you could buy cheap drinks in the mess without sales tax: people would light up, and go and get into trouble. One of the most unpopular decisions I made as Chief of the Defence Force was to make the mess drinks full price equivalent to a civilian. People were not very happy, but it went a long way to changing behaviours. And if people don’t push back from change, then you’re not really changing.

As someone who has risen to the top of the Defence Force I’m sure there’s been a lot of complicated situations that you’ve navigated through. What have you found that’s been helpful to give you strength in the times that are uncertain?

The starting point is the leadership stuff, and don’t ever believe this is an easy thing to do. With military leadership you make life-and-death decisions. In civil leadership, you may not make life-and-death decisions, but you will make decisions about the quality of people’s lives. For instance, what’s their salary? And therefore what sort of house do they live in? What sort of holidays do they have? Where do their kids go to school? Right out there at the moment, bosses are sacking people, laying off people, so these are difficult decisions.

In the military, particularly in operations in the field, the pressure is so real it’s touchable. It’s a weight, it’s a presence. You can feel it – and you can experience that in other types of jobs. So you’ve got to develop something inside you that allows you to get through that. Not just to survive it, but to be successful for those who you lead, which is absolutely critical.

You’ve got to work out what that is and build it. However, if you find yourself leading because it makes you look good or it’s good for your ego, then you’re in the wrong game. Leadership is about failing and learning. The unfortunate thing about leadership is you learn on other people, and you will fail – we all fail – but you’ve just got to keep going. So there’s a persistence thing in it there, because when you do fail and you pick yourself up from the floor, you learn from that.

You can be taught to lead, there’s no doubt about it, and you learn from those falls and the successes. You’ve got to have a degree of self-belief, of course. And that’s where that ego comes in, but that’s the hardening of ego rather than the ‘look at me’ bit of ego.

You learn to listen and build, and take advice, and turn that advice around, in the military sense, to give orders. And people will obey the orders because they’ve been part of the problem-solving. So you learn that, and sometimes you get it wrong and people remind you of that! But you build it up – everyone is very capable of developing that resilience.

What is your hope for the Australia that comes out the other end of this crisis on the road to recovery?

Now, we know we’re going to be in an area where our health system is being geared up to help protect us from the virus, because it’s bound to come back, I would think.

We’ve got an economy that has had a very adverse impact on it through some of the decisions the government has had to make. So we’re going to have to rebuild that economy.

And on the social side, we will have some big issues to deal with because we know that mental health has got to be an issue, and we know that alcoholism and drinking will be issues. We know that in many of the areas where we’ve relied on face-to-face interactions for support, we haven’t been able to do that. So there’s an integrated health area that needs to be dealt with as well.

Those three big themes are out there. And we have to decide: what is the new Australia going to look like? It’s not going to be completely new, but it will be different. So where are those particular areas we’re going to develop?

I would hope that one part of that is we come to value each other more. We’ve had this huge rush of technology that’s come into our society and is contradictory, in a sense: it’s connected us, but separated us. Now we’ve learned, perhaps, over the last six weeks, to deal with that separation more constructively through the technology. But I hope it’s also made us realise: Wow! we actually need each other!

I’ve met Prof Michelle Simmons a few times. Michelle is a quantum physicist and professor at the University of New South Wales where she’s leading the Australian project to build a quantum computer. She was the Australian of the Year a year back. Brilliant woman. She was born in the UK and migrated to Australia. ‘Why did you come to Australia?’ I asked Michelle, and she said, ‘Because Australians take on and tackle the big problems.’

We don’t necessarily see that in ourselves all the time, but others outside do. We’re very cynical here and critical of ourselves. But it’s in our DNA to take on the big problems. Maybe we’ve got a bit lazy over the last decade or two in some areas, but if there’s a big problem we have the intellect, the drive, the power of the people, and I think the compassion to take on these big issues that hit us.

I’m not coming here from a point of preaching, about what you should drink and what you shouldn’t drink and so forth. But I do say from a personal perspective I know the damage that alcohol can do. So don’t sit at home and say, it’s beyond me. It’s not. I’ve seen lives turned around positively because people have reached out. So what Hello Sunday Morning has developed is a way forward. It really is. So grasp it, and seek support. Be supportive of others and just be measured in the way you approach life.