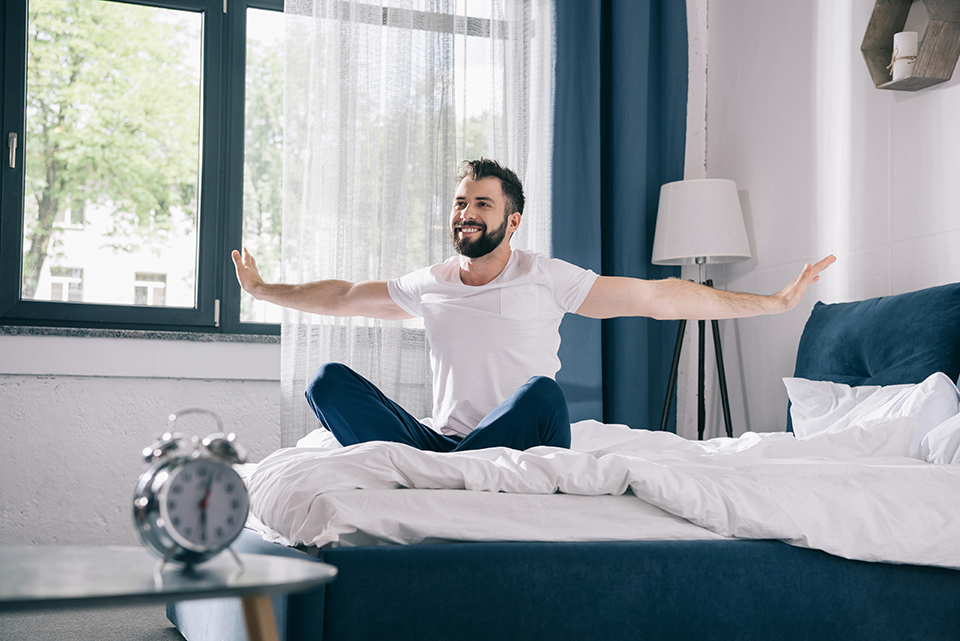 In its earlier days, Hello Sunday Morning encouraged people to “do an HSM challenge” – a period of three, six or 12 months completely without alcohol. I recently started working as Head of Marketing with HSM and decided to get into character by giving this a go for the first quarter of this year. I chose the easy-peasy three-month entry-level point, and at the halfway point of just six weeks, this is what I have found …

So, what happens when you give up the booze?

I imagine it depends on how large booze looms in your life before you jam the cork back in the bottle. In my case, I suspected that my drinking was on the wrong side of the bell-curve, although not to a reckless or unhealthy extent – but maybe I’ve been deluding myself. One time in my 40s I reviewed the previous year and realised that my casual drinking had become habitual, to the point where there probably hadn’t been a single 24-hour period in that 12 months when I wouldn’t have blown over 0.05 in a breathalyser at some stage.

I cooled it a bit on that realisation, but through my 50s I’d still drink nearly daily, although I started to leave a few alcohol-free days in the working week. My drinking left me functional and I had no problems with it domestically (I have a wife who matches me drink for drink). It was normal when compared against my circle of friends, and it was also normal when compared with what I remember of my parents’ drinking.

I like to drink. I don’t like being at the point where I slur my words (and that is quite a low threshold for me), but I certainly enjoy heading in that direction. On normal evenings, when I was working the next day, I would share a bottle of wine with my wife, and often get some way into a second. On weekends, it would be two bottles between us on both Friday and Saturday. I’m not a great one for following expert advice on health, but even I could work out that I was consuming up to 35 standard drinks per week, compared to the 14 that is recommended as a safe limit.

So what prompted me to give it up?

Well, I noticed that I functioned better on those days following an alcohol-free day. In particular, I slept very much better. On nights that I drank, I would go to sleep readily, but often wake up after midnight with a racing mind and anxious thoughts. Sometimes this would be accompanied by a hard-beating heart, and a return to sleep was always a few hours away (usually just minutes before the alarm clock went off). It left me feeling like crap the following day, even when there was no detectable hangover. On alcohol-free nights, I would usually sleep right through, and if I did awaken in the night, I could easily fall asleep again.

On working weeks that I went alcohol free, it was clear to me that my alertness, focus and general intellect improved as the week wore on, and I began to wonder if, perhaps, a late-40s career plateau had been partly self-inflicted.

Finally, I recently began to wake up in the mornings with distinctly tender feelings in the kidneys, which would pass after a couple of hours. On days following an alcohol-free night this never happened.

So this year I’ve decided to do a Hello Sunday Morning 3-month challenge: no booze at all until April. I’m now at the six-week midpoint and I’ve noticed some positive things, but I’ve also noticed a few downsides, so here they are in summary:

Upsides of going without alcohol

Sleep. The first and most unmistakable benefit is a great night’s sleep. This kicked in after the first 48 hours, but it also seems to be improving over the six weeks. Not only is the sleep deep and unbroken, but the quality of dreams also seems to have improved: they’ve been more detailed, linger in the memory for longer with an almost cinematic quality to them, and for some reason often feature Her Majesty the Queen (although I realise this last phenomenon may not be universal).

General well-being. You know how your car feels after you’ve just given it a 15,000 km service? You can’t put your finger on it, but everything seems tighter, more responsive and just works better? That’s how I felt at the two week mark, and it hasn’t fallen off yet. I know I would pay a lot of money for a vitamin supplement that had this effect.

Energy and focus. There’s been a small but definite improvement in my work performance, particularly in my ability to concentrate, organise and generally be ‘present’ during meetings. The effect carries over when I get home. Just the other night, I ate my dinner and then carried on painting a spare bedroom from where I’d left off over the weekend. That wouldn’t have happened if I’d opened a bottle of wine first. However, it doesn’t last long into the night, and I’ve been going to bed earlier than usual since starting this dry spell.

Mood. I’m told we all conduct a continuous dialogue with ourselves in our heads during waking hours. Over the past couple of decades, my dialogue has tended towards the unhelpful and self-critical, particularly at 2:00 am when I’m trying to get back to sleep. I think it’s had a corrosive effect on my self-confidence over that time, because I can feel confidence returning during this period.

Downsides to going without alcohol

Something’s missing. I’d got into the habit of coming home, starting the cooking and opening a bottle of wine each day. For the first few weeks I felt uneasy during the 5:00–7:00 pm window – like I’d forgotten to do something important. A glass in hand was a prop for the post working-day chit-chat with my wife, and it felt odd without the wine. It’s also noticeable that our conversation doesn’t flow or digress onto tangents in quite the same way.

Twinges. Every now and then, quite out of the blue, I get a pang of regret that I won’t be opening a bottle of shiraz tonight. It passes.

NA substitutes. During the first few weeks we tried some of the non-alcoholic options that are available, with mixed results. To my surprise, the non-alcoholic beers were pretty good. It’s obvious at first sip that Cooper’s Birell is non-alcoholic, but if you accept it for what it is, then it’s a very pleasant thirst-quenching lager-style drink. Carlton Zero actually does taste like a nicely hoppy-flavoured beer, but tends to bloat a bit. Other than the beers, there don’t seem to be any ersatz products that have the same satisfying depth of flavour of a wine or spirit. The NA wines were pretty dire; the whites were too sweet, and the reds were flat, like a bottle that has been left open for a couple of weeks. We also tried the non-alcoholic distilled botanicals which are promoted as an alternative to gin. For the life of me, I couldn’t detect the connection. One of them tasted like water that had recently been used to boil peas, and the taste of all of them was too weak to survive a mixer. (However, my wife really likes the Brunswick Aces with tonic water.)

Adverts. I’m realising now just how powerful adverts for booze are. They ambush you with a desire when you’re going dry, and either the industry has recently doubled its advertising spend, or the ads have always been all over the place. Product placement also works well on me. I’ve never been much of a spirit drinker before, but the sight of a couple of fingers of golden scotch being poured in a Netflix series gets me thinking “Mmmm – whiskey …” The cues are everywhere!

People’s reactions. This is quite a complex one, and I might expand on this at the three month mark. Most people don’t give a damn if you’re not drinking, and that’s great. However, some people take it as passive-aggressive criticism of their own drinking, or as a dismissal of their culture, almost a form of apostasy. I’m building a repertoire of responses beyond “mind your own business”, and I’ll give them a test run for the remainder of the 3-month trial.

Which brings me to contemplation of my return to boozing in April. On the one hand, I’ve got my eye on the exact bottle of shiraz for opening on 1 April. But on the other hand …

The last couple of weeks have been quite easy as I settle into new habits while still noticing the benefits, and I’m tempted to stretch this out to a 6-month HSM challenge period. I remember once reading an interview with Mel Gibson (okay, not the best choice of role model, perhaps – but this was about 20 years ago) who was talking about the benefits of staying off the grog. He said the real benefits don’t kick in until 6 months, but that most people simply don’t have the patience to last that long.

That’s got me curious …

Join the 70,000 people who get our latest blog, media articles and personal stories delivered to their inbox every week