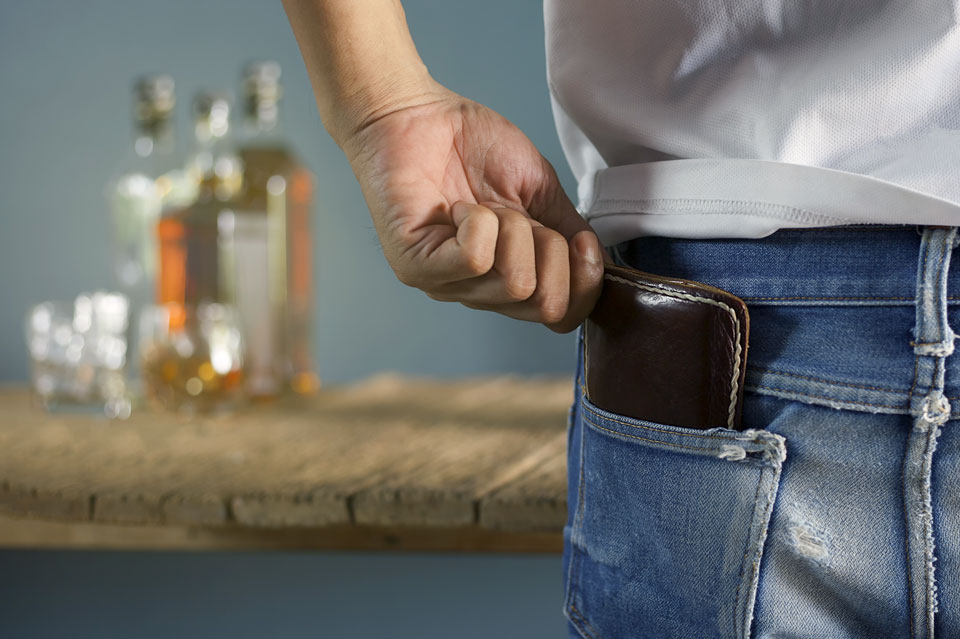 How much money can you save by not drinking?

This week’s guest blog discusses the financial consequences of giving up alcohol. How much money can you save by not drinking? More than you might think, when you begin to realise it’s not just the grog you’re spending money on.

When we talk about the benefits of easing back on alcohol intake, we usually focus on the positives for our bodily and mental health. But one often-overlooked benefit that very quickly becomes apparent to newly moderate drinkers is the amount of money that stays put in their wallets when they say ‘No’ to the booze.

There are two ways that it stays there: the obvious way, from not spending money on the stuff, and the less direct ways, like not having to spend on other things because you’re not drinking. Let’s take a look at these in turn.

As we get older we tell ourselves that we deserve a better standard of wine, that the good old goon-bag from our student days is beneath us, and that the sophistication of slurping a premier cru somehow atones for the fact that we are now drinking well over the recommended weekly limit of 14 standard drinks. For middle-aged men like me, with entrenched drinking habits and an unshakeable belief that they can detect and appreciate the difference between a $20 and a $40 bottle of shiraz, giving up the grog for a month or two can add some serious dollars back into household revenue.

Consider a couple who are regular wine drinkers, with perhaps the odd beer thrown in. They’re set in their ways, and let’s say they share a bottle of wine most weeknights, plus a bit more over the weekends. That leaves them drinking their way through 8 bottles per week between them. They’re a bit choosy about what they drink, but not obsessed, so we’ll assume they average out at $20 per bottle. That comes to $160 each week, or $8,320 in a year. That gets a nudge upwards from peak-season holiday drinking, and the odd bottle of spirits or case of beer, so it would be easy for this couple to pass the $10,000 per year threshold. Changing the amount they drink can be the equivalent of a significant pay rise.

And that’s just for drinking done at home. If you’ve bought a round of drinks in a bar recently, you’ll know how quickly that can empty out the wallet – especially when exotic cocktails are involved. You’re in for a pleasant surprise when you dine at a restaurant sans alcohol, because, if you are like me, you’ve had your share of restaurant meals where the booze made up more than half of the bill. It’s an irritation because you know that, unlike the food, which was slaved over by skilled practitioners in the kitchen, the restaurateur did nothing other than buy and store the wine to justify a markup of three or four times what you could buy it for at Dan the Man’s.

But it is simplistic to talk about only the direct costs of purchasing alcohol when considering the savings that accrue when you give it up for a while (or even if you just dial down the consumption a little). There are considerable indirect savings to be had, too. Consider the latest curse of our internet age: drunk shopping.

You can see how it works: you’re sitting alone at night with an open bottle and an iPad for company, flicking idly through Amazon when you are hit by the sudden realisation that your wardrobe really only lacks a Noel Coward-style bottle green quilted smoking jacket for it to be complete. A few taps on the keyboard and the deed is done – with sanity and buyer’s remorse catching up only the next morning, when it’s too late.

According to a US survey earlier this year, 79% of alcohol users have made at least one alcohol-fuelled purchase online, with the average yearly spend an eye-watering $444 in a year!

There’s a long list of additional secondary costs that are reduced or entirely avoided when you wind down the booze:

Then there’s the unquantifiable, but still very real, effect of alcohol on your general levels of energy and productivity. Economists would tell us there’s an opportunity cost to getting pissed – it diverts you from doing more productive things, and the effects can linger. If you’ve ever given up the booze for a sustained period, you’ll know what I’m talking about. Your mornings are no longer spent with a woolly head and a desire to take it easy. Instead, you’ve got an unaccustomed level of energy and focus, and over the long term that’s a major component of financial success, greater productivity, more promotions, bigger bonuses, etc.

So the bottom line is pretty clear. You’ll notice a lot of differences when you deliberately change your relationship with alcohol – most of these changes are positive, and a small number are neutral or even negative. But one immediate, unmistakable and completely quantifiable effect will be on your personal finances.